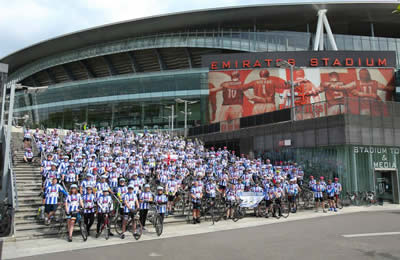 Our Director David Fryer will shortly be participating for a 7th consecutive year in a sponsored bike ride to raise funds for Yorkshire Air Ambulance.

David – a lifelong Huddersfield Town fan – will be part of a group of around 300 fellow supporters riding the annual “Pedal 4 Pounds” event. It is a 3-day ride, which finishes at the John Smith’s Stadium in Huddersfield, in time for Town’s final game of the season against Brentford.

The event began in 2009 when Dean Hoyle – who was then in the process of buying the club – vowed to ride from Huddersfield to Southend for the first away game of the season. Since then it has become an annual event and David Fryer has so far completed all of them, raising thousands in his own right for the Yorkshire Air Ambulance.

The theme of this year’s ride revolves around the legendary Bill Shankly. Although best known for managing Liverpool, Shankly also managed Carlisle and Huddersfield. The ride will start from Carlisle and then head towards Liverpool, and onwards to Huddersfield. It will cover 215 miles across 3 days –

David takes up the story:

This all started several years ago when the Huddersfield Town incoming Chairman Dean Hoyle announced that he would cycle to the venue of the first away game at the start of the 2009-10 Football Season.  The resultant fixture list could have meant a reasonable run to Leeds, Oldham or Barnsley however, Southend United came out, much to the horror of the 22 “cyclists”.

It started as a one off chance to raise some much needed funds for what is an excellent cause however, weve since ridden either to or from Arsenal, Brighton, Yeovil, Blackpool & Edinburgh and in doing so, we have raised over £1.2m”.  This year’s event has us riding from Carlisle to Morecambe, then Liverpool and back to Huddersfield and we are desperate to trigger the £1.5m mark.  As an average we cycle around 100 miles per day over a 3 day period.  It’s a massive effort to train and complete the event as clearly, I’m not a cyclist however, on the infrequent downhill sections, gravity does take over whereupon I’m fondly known as ‘Downhill Dave’.

Keep an eye out for further updates on David’s training, and the event itself which begins on May the 5th.